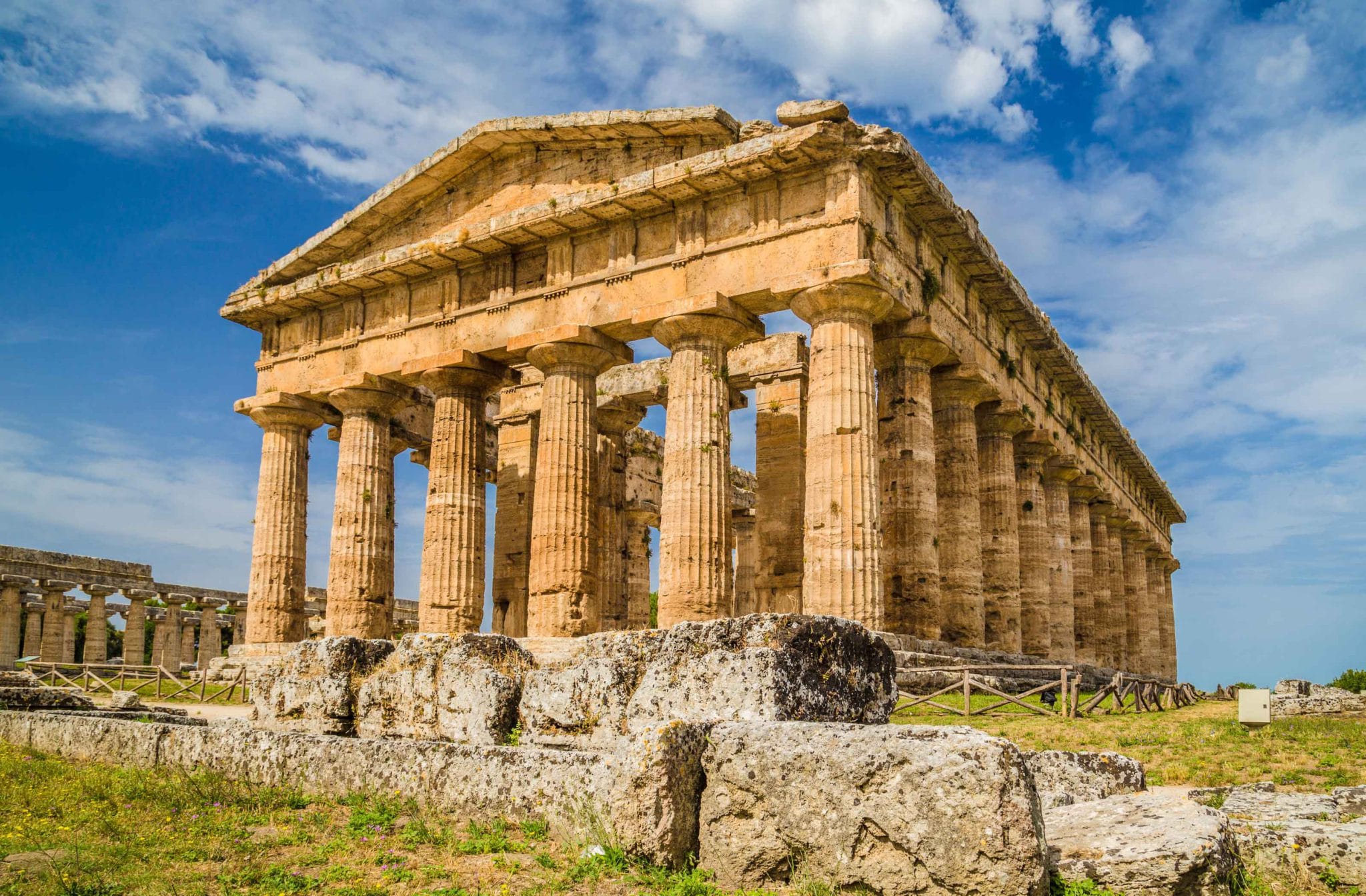 The focus of our tours of Southern Italy is the territory of the “Magna Graecia“ – the name given by the Romans to the coastal areas of the Mezzogiorno – which is both one of the least explored and at the same time one of the most rewarding regions of Italy for the visitor. It is a region of often spectacular scenary and unspoilt lanscapes. It is also justifiably renowned for its fine food and rich culinary traditions.

* price per person, based on 2 people sharing a room. Single supplement, if applicable: £495. Prices do not include flights.

We meet in Naples in the morning and drive to Paestum.

We spend the day at the classical site of Paestum which exhibits three of the most well-preserved ancient Greek temples to be found anywhere in the world and utterly unmissable for anyone with even a passing interest in Ancient Greek history or architecture.

Originally known to the Greeks as Poseidonia (Ποσειδωνία in Ancient Greek) in honour of the Greek god of the sea the city was founded as a satellite city of Sibaris in the late seventh century BC. It was later conquered by the local Lucanians and successively also by the Romans.

We spend the morning exploring the archaeological site: the three temples – the two temples of Hera and the third temple of Athena as well as the Roman forum, the bouleuterion and a small residential quarter.

After a light lunch we spend the afternoon in the fabulous museum where amongst other treasures we can admire the interior of a tombs decorated with some of the most iconic examples of Greek art.

In the morning, we drive Easter skirting the beautiful Cilento National Park towards Potenza. In the late morning we stop off at Castelmezzano – a charming medieval town that nestles beneath what are known as the “Dolomites of Basilicata”.

There is time to explore the town before lunch and an onward drive to Matera.

Evening meal and overnight in Matera.

Matera is said to be one of the world’s oldest towns: with remains dating back to the Paleolithic age and inhabited continuously for around 7000 years. We spend the morning visiting the town. The grottoes of the gorge were adapted to become homes, and by the 17th century it had become a prosperous town. But by the twentieth century more than half of the population were still living in these caves and the city became renowned for poor and backward. However, Matera has taken huge steps to unbridle itself from its past and for 2019 it is Europe’s capital of culture.

We spend the whole day exploring the Sassi (literally “stones”), as the ancient part of Matera is now known. We visit ancient basilicas, rock dwellings, underground cisterns and cave churches – where there are there are some fine frescoes to be seen.

Evening meal and overnight in Matera

After breakfast we depart Matera for Metapontum where we visit the fine remains of another Greek temple: the Temple of Hera. Known as the “Palatine table” there is a local legend that the remaining columns of the Greek temple once supported the banqueting table of a mythical giant king.

We then head for Aliano, passing through an extraordinary landscape of what are known as calanchi – sandy-soiled rocky hills.

However, the main focus of our interest is the town of Aliano itself, which is most famous as the setting of Carlo Levi’s Cristo si è fermato a Eboli or, as it is translated into English, Christ Stopped at Eboli– later made into a fine film by the Italian director Fracesco Rosi and surely one of the most important books of 20th century Italian literature. Levi was a doctor and a native of Turin, who in 1935, was sent into internal exile by the facist government of the time, to the village of “Gagliano” (actually Aliano). On arriving in the region, he was horrified by the poverty of the region, but despite being a political exile, Levi was welcomed with open arms by the villagers. By the time he left the village a year later, his opinions of the people had changed to one of great admiration and affection.

In the late afternoon we depart for Terranova di Pollino where we stay in a small family-run hotel, deservedly renowned for its Southern Italian cuisine. It’s owner and chef, Pino, regularly appears on Italian television shows.

We spend the morning visiting some charming corners of the Pollino National Park which is one of the great untouched areas of Europe and home of the Loricato Pine – a species of pine native to the Balkans and Southern Italy.

There is also an opportunity to visit San Paolo Albanese and learn about the Albanian communities who inhabit the peninsula of Southern Italy.

After lunch, we depart Terranova for Pizzo.

Evening meal and overnight in Pizzo .

We begin the day visiting Pizzo. This charming town is home to a fine 15th century Aragonese castle and the site of the execution of one of nineteenth century’s most colourful figures – Joachin Murat, the brother in law of Napoleon Bonaparte.

After lunch we visit the beautiful seaside town of Tropea where there will be free time to explore or just enjoy the beach.

Departing from Pizzo we drive up into the hills towards Serra San Bruno where we visit the Cartusian abbey, still home to the Cartusian monks today.

We drive down towards the Ionian coast and the town of Stilo – home of one of the most iconic “Greek” churches in the whole of southern Italy. The church is only tiny, but its perfect proportions and stunning aspect make it a favourite for photographers.

In the afternoon we drive to the Romanian Orthodox monastery of San Giovanni Theristis before setting off for Gerace.

We have a full morning exploring the wonderful town of Gerace with its noteworthy remains of a Norman castle and fine churches. It was visited by Edward Lear in the nineteenth century and in the town museum we can see reproductions of some of his prints. There is also a chance to learn about the production of Bergamot and to taste some typical local products.

We spend the afternoon exploring Locri – the ancient Epizephyrian Locris (Ἐπιζεφύριοι Λοκροί or The Locrians upon the West Wind) – another of the great cities of the Magna Graecia and which Plato called “The flower of Italy” due to the characteristics of the local peoples.

We depart from Gerace in the morning and drive to Reggio Calabria.

In the afternoon, we visit the stupendous Riace Bronzes on display in the museum in Reggio Calabria. These are two full-size Greek bronzes of naked bearded warriorsfound in the sea near Riace in 1972 and dated to around 450-460BC. They are arguably some of the finest Greek statues ever to have been discovered.

Drive to Reggio Calabria railway station in time for trains to Rome.