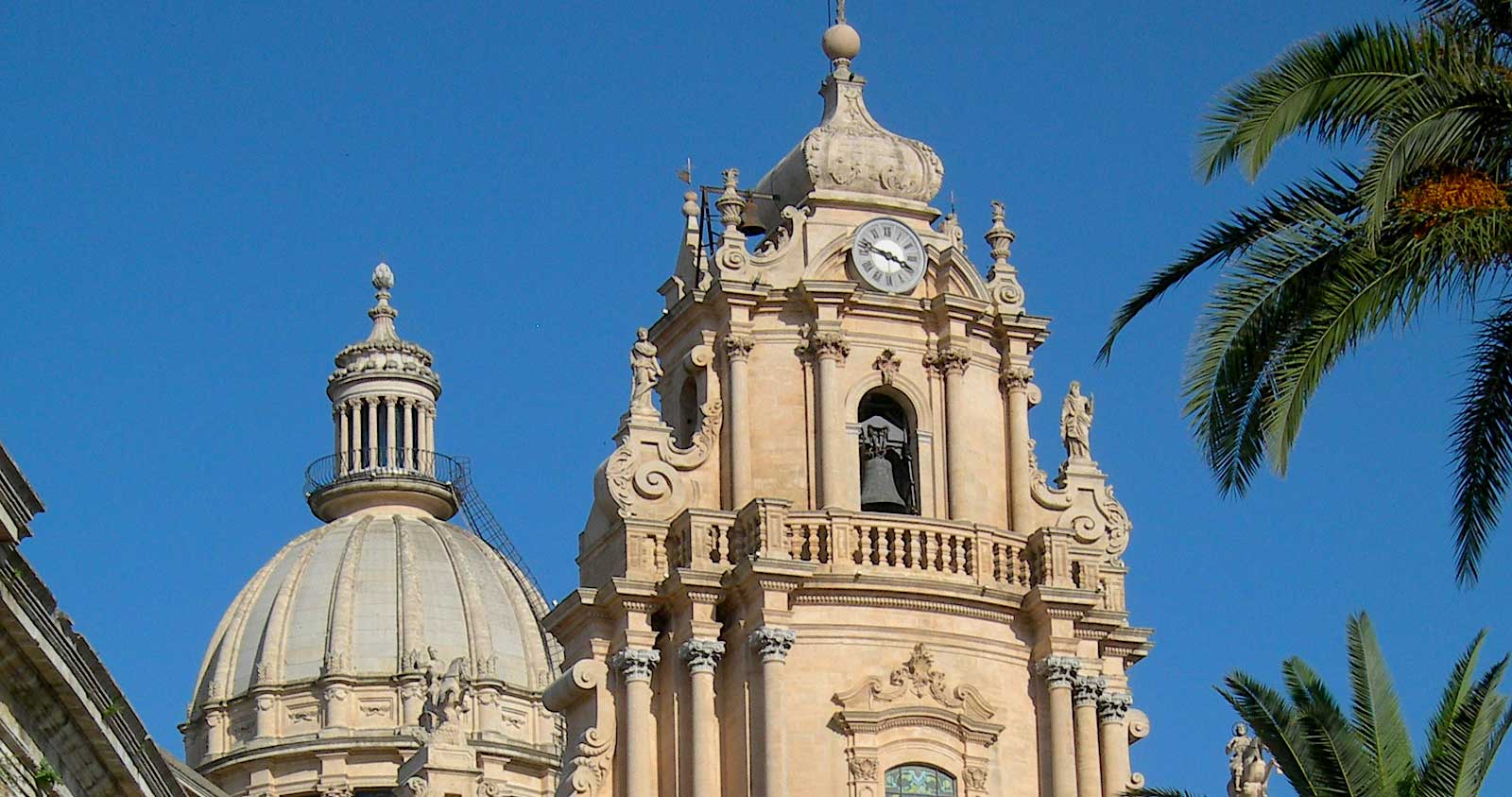 “South Eastern Sicily has been made famous by the filming of the Inspector Montalbano TV series, but its handsome architecture more than justifies this stardom. Our Baroque Sicily tour” is set among just such a landscape

* price per person, based on 2 people sharing a room. Single supplement, if applicable: £295. Prices do not include flights.

At around 9pm on January 11th 1693 a ferocious earthquake struck the South Eastern corner of Sicily destroying almost everything in its path. We don’t know for sure how many people died, but the scarcity of buildings remaining from before this date point to a very catastrophic event indeed.

The rebuilding programme in the final years of the seventeenth century and the early years of the eighteenth was largely financed by the Church and coincided with the period we know as the counter-reformation. The architectural style which gave expression to this movement was known as the “Baroque” and is characterised by an effusion of decoration. With the light coloured local limestone and in the sparkling sunlight of Southern Sicily, the effect is magical.

In those days, Sicilian families were large and among the upper class many of the offspring would be expected to join the church – either as a priest or a nun – and their enrollment would be accompanied by a large dowry paid to the Church by the family and which would assure the patron’s place in heaven. As a result, the Church was by far the largest and richest landowner and not surprisingly the rebuilding programme was dominated by religious buildings: handsome churches, grand cathedrals and exapnsive monasteries.

Fortunately, it also coincided with the lives of some of Sicily’s finest and most visionary architects: Rosario Gagliardi, Vincenzo Sinatra, Andrea Palma and Giovanni Battista Vaccarini. These talented and prolific architects gave rise to a new urban landscape that has come to be the jewel of the Mediterranean.

The locations are beautiful in themselves (and merit a visit just for their own splendour) but to fans of the Commissario Montalbano TV series, they will have extra special resonances. Built with the local sandstone and limestone, in the predominantly baroque architectural style of the late seventeenth and early eighteenth century, the towns in this area display pride and majesty.

Transfer to our hotel in Noto.
Evening meal and overnight in Noto.

Ancient Noto had once been the administrative centre of the whole South East of the island, but after its almost total destruction by the earthquake it was decided to build a new city 13km from the original site. The Noto we visit today, therefore is a fine example of an eighteenth century “new town”. Characterised by a homogenous architecture built from a gorgeous pink-tinted local limestone and organised on a straightforward grid-plan, the city is the perfect introduction to the Sicilian Baroque.
There is a chance to visit the cathedral, Palazzo Ducezio, a delightful Garibaldi Theatre and several stunning smaller churches. Or just sit in the one of the many street cafe’s and enjoy the ice-cream.

Evening meal and overnight in Noto.

Departing from Noto we head south to the little visited but utterly charming Ispica with its delightful logia and stunning church – Santa Maria Maggiore. After visiting the town centre we go in search of the ancient Ispica – clustered in grottoes in the adjacent valley.
After lunch we drive down the coast, stopping at Vendicari to see the flamingoes and then proceeding for Marzamemi with its intriguing tuna factory and beautifully photogenic piazza.
We proceed to Modica where we stay the night.

Once known as the “Venice of the South”, Modica is characterised by two deep gorges which meet at a confluence in the town centre. Until the beginning of the twentieth century, these had been the beds of two fast flowing rivers, but after some catastrophic floods, the river was dammed further upstream and the water diverted elsewhere. Nowadays though, these two streets are the site of some charming street cafes and Modica’s other attraction: chocolate shops.
We spend the full day in Modica.
Evening meal and overnight in Modica.

The central piazza in Ragusa Ibla provided the location for much of the filming of Inspector Montalbano but equally charming is the beautiful ‘park’ (or villa comunale as it is known in Italian) at the entrance to the town.
We spend the morning strolling through its streets and perhaps savouring some of the famous ice cream from “Gelati Divini”.
After lunch we head to the fine pastiche castle of Donnafugata – which in the Montalbano films was the residence of the local mafia boss. We then return to Modica.
Evening meal and overnight in Modica.

Scicli was something of a backwater until the filming of Montalbano, but since the mayor’s office in the town hall was selected as the site of the Inspector’s office, it is now firmly on the visitor’s map. But its new popularity is entirely justified. We spend the day exploring this charming and interesting town. In particular, we visit the Municipio, the Farmacia, the Palazzo Fava and the church of Sacro Cuore di Gesù.
Evening meal and overnight in Scicli.

No trip to the South East of Sicily would be complete without a visit to the sea. And today we visit a couple of the coastal villages and there will be time too for a dip in the sea for those who have bought their bathing costumes.
Evening meal and overnight in Scicli.

Transfers for departures as required.

Watch a video of Damian Croft talking about Baroque architecture in Sicily: