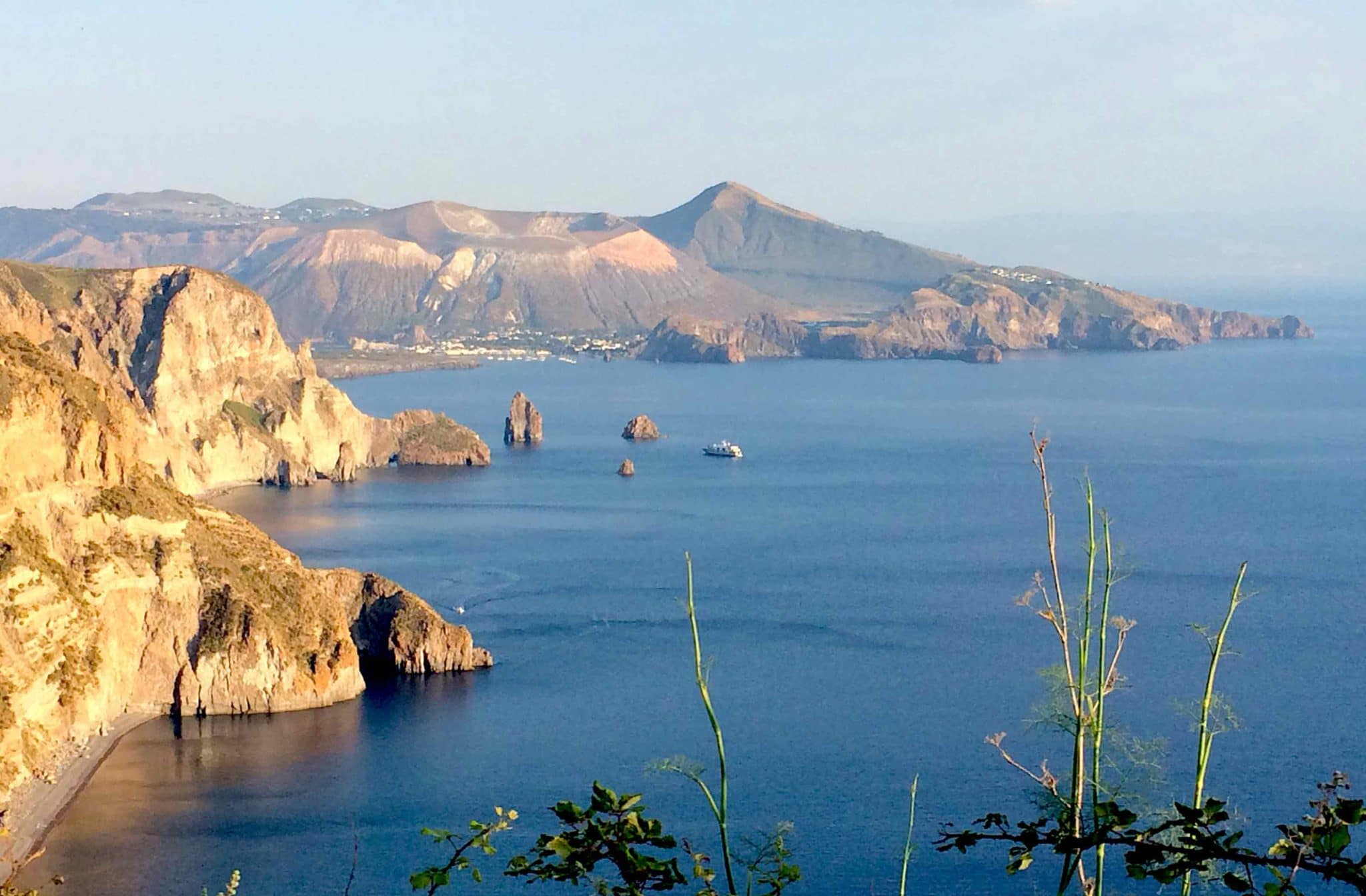 Walking in the Aeolian islands

Our Aeolian Islands walking holiday visits each of the seven islands in turn: Alicudi, Filicudi, Salina, Panarea, Stromboli, Lipari, Vulcano. Some strenuous walking is rewarded with some memorable views.

Scheduled dates for Walking in the Aeolian islands

* price per person, based on 2 people sharing a room. Single supplement, if applicable: £230. Prices do not include flights.

Quite rightly known as the “pearls of the mediterranean”, the seven islands that make up the archipelago of the Aeolians, with their two active volcanoes, offer some exceptional experiences for walkers. From drinking in the remote and tranquil atmosphere of Alicudi to climbing Stromboli and witnessing its dramatic eruptions at night, each island effuses a markedly individual character. And it is precisely the individuality of the islands that makes travelling to them so much fun.

Arrival in Sicily and transfer to Milazzo

We rendezvous at Milazzo in the morning. For those arriving the previous day we are able to organise transfers from Catania and overnight stays in Milazzo the previous night.

In the early afternoon we transfer to Alicudi – the furthers of the islands – by hydrofoil (3 hours).

Evening meal and overnight in Alicudi.

On Alicudi – the most remote and smallest of the islands – there are no roads, only stepped tracks up the steeply terraced hillsides. There are several choices for walking One option is to take the. mule track to the church of San Bartolomeo. For those who are feeling more adventurous, there is the option of a strenuous hike to the summit for some beautiful views over the rest of the archipelago to the north coast of Sicily beyond.

In the afternoon, there is the option to take a boat trip for a circuit of the island.

Evening meal and overnight on Alicudi.

After breakfast, we depart for Filicudi. With its natural beauty, sparse population, whitewashed houses, lack of cars and wonderful network of well-maintained mule tracks, Filicudi is considered by many visitors to the islands to be the prettiest. The offshore stacks are a haven for birds, in particular the Eleonora’s falcon. We walk to find a Bronze Age village excavated on the Capo Graziano.

For those who wish, and weather permitting, there may also be the possibility of doing a tour of the island on one of the local fishing boats.

In the late afternoon, we depart for Salina.

Twin-peaked Salina is the greenest of the islands. We start early in the morning and climb to the summit of its highest point, Monte Fossa delle Felci for some stunning views across to Lipari and Vulcano as well as to Stromboli and back to Alicudi and Filicudi. After lunch in Santa Marina, there will be time to relax by the hotel pool (or swim in the sea) before, in the early evening, we go to visit one of the island’s wine makers, still producing the local malvasia in the way it has been produced for centuries.

We transfer to Panarea, the smallest and most exclusive of the Aeolians, and spend the day walking to its highest peak, Punta del Corvo, returning via a fascinating Bronze Age village of circular stone huts which were probably inhabited way back in the 14th century BC. Back in the village of Panarea, where the local architecture has been carefully preserved, there is time to enjoy the atmosphere of the fishing harbour — or its rather cool bars and boutiques — before we return to the hotel.

Evening meal and overnight in Panarea.

In the morning, we’ll catch the hydrofoil to Stromboli, the most active and dramatic volcano in Europe. After a light lunch there is a chance to rest before starting the hike in the late afternoon.

Setting off around 4pm in the afternoon, our hike takes us to the observation point at 400m. Arriving there at dusk there is a chance to watch the eruptions before descending to a nearby restaurant from which we can further watch the eruptions over dinner. After dinner we walk back in the dark along an easy track to the hotel.

After our ascent of Stromboli, we have a lazy morning the following day and in the late morning, take the hydrofoil to Lipari where we arrive in time for a late lunch.

After lunch, there is an opportunity for a magical Aeolian walk along the Western coast of Lipari. This is a gentle walk by comparison with the previous day’s exploits, but nevertheless, there are some breathtaking views over to Salina, Filicudi and Salina. Alternatively, of course, it is also possible to spend the afternoon relaxing by the pool of the hotel.

Evening meal and overnight on Lipari.

In the morning we make for Vulcano – of outstanding interest for its g spectacular volcanic landscape. We climb still-active volcano up to the lip of the crater, Fossa Grande (391 m), steaming with yellow sulphurous gasses, from where there is a remarkable view down right inside the crater. Compared to the hike up Stromboli, this is an easy walk, but the views from the top are just as panoramic, stretching right over the Aeolian archipelago.

After lunch we return to spend the afternoon in Lipari. There is time to visit the museum – one of the best in Sicily – and perhaps do some souvenir shopping before we depart from Lipari the following day.

Evening meal and overnight on Lipari.

Return to Sicilian mainland and Departure

We depart Lipari in the early morning and hope to be back in Milazzo for 10am for transfers to the airport.