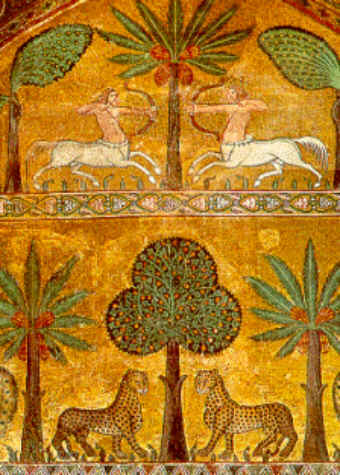 We now have a new logo:

The design comes from the mosaics on the wall of the so-called “throne room” of Roger II in the Palazzo dei Normanni in Palermo and depicts two leopards facing each other under an orange tree.

The mosaics in the Palazzo dei Normanni are usually attributed to Byzantine craftsmen, but whether consciously or unconsciously, the designs in them actually evoke Sassanian Persian motifs known from earlier in the Byzantine empire. There are portrayals of palm trees, peacocks, lemon groves, but most typically, they display the unmistakeable hallmark of Sassanian animal symmetry.

The Sassanid empire (224-651 BC ) had its capital at Ctesiphon in present day Iraq and ruled over much of Mesopotamia and ancient Persia. More importantly however, it controlled almost all of the silk trade that passed through the Middle East. It is most likely therefore, that the designs we see in the Norman Palace, were known from silks that were imported into Sicily in the early middle ages.

Norman Palermo was surely the most extraordinarily cosmopolitan of medieval cities – in which Jews, Arabs, Greeks as well as Norman French and Italians all held posts of responsibility and importantly for us, these mosaics encapsulate the free expression of the enlightened and tolerant Sicilian Norman kings.