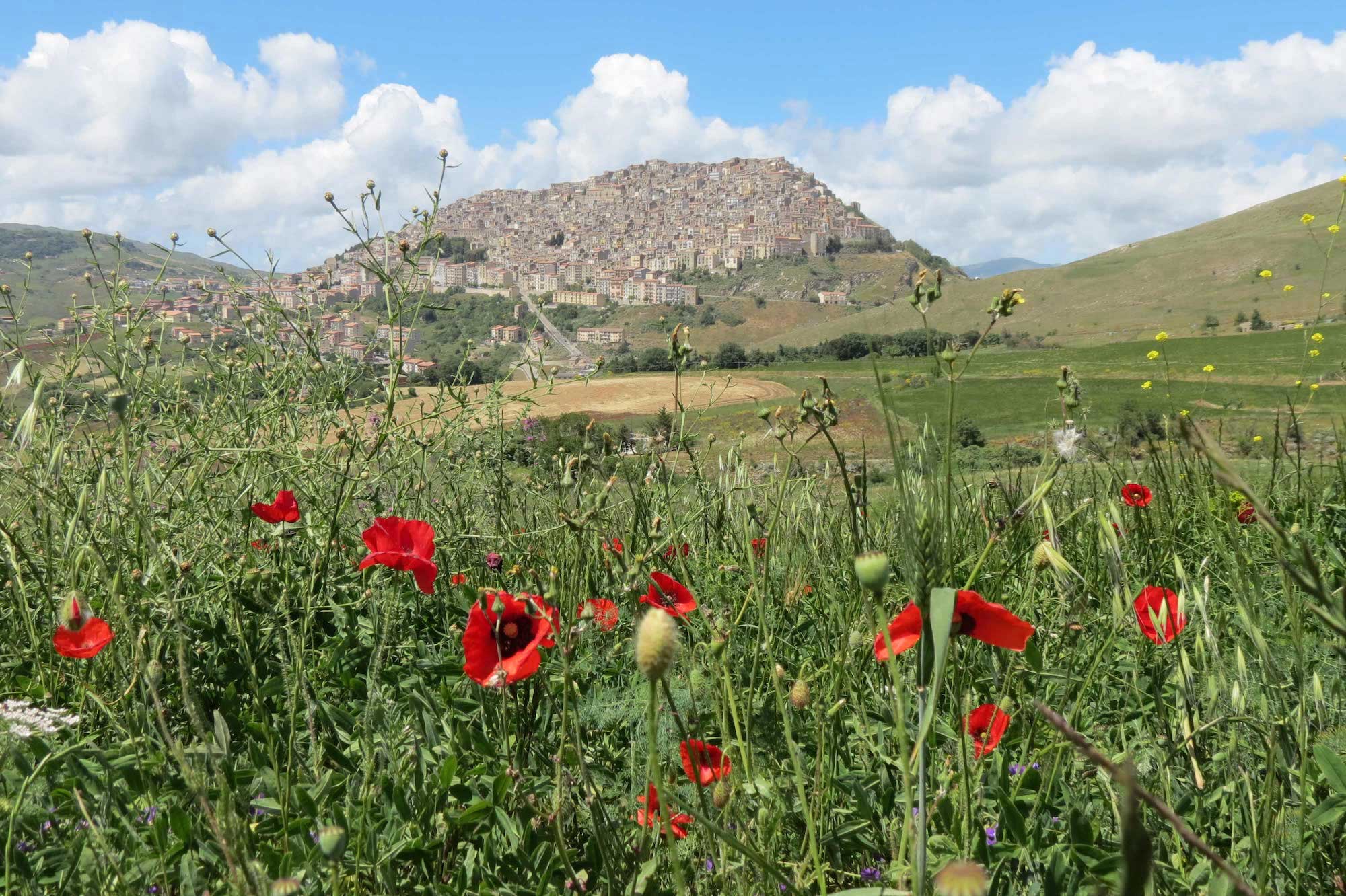 The Sicily Tour that goes to places no other tours go!

We believe our Hidden Sicily tour really is something special – an expert-led small group tour visiting sites and unspoiled villages that are magical, exceptional and off the beaten path. It is the perfect tour for those interested in photography or wild-flowers, or those who have seen the main sights of Sicily and wish to explore further and get off the beaten track to travel the backroads.

* price per person, based on 2 people sharing a room. Single supplement, if applicable: £395. Prices do not include flights.
enquire about this tour

Arrival in Catania and onward to Enna

We arrive in Enna mid-afternoon, check in at the hotel, and head out to explore the town.

At 931m above sea-level, Enna is the highest provincial capital of Sicily (and indeed the whole of Italy). Perched on the crest of a huge saddle of rock, the town is visible throughout much of Sicily’s interior, and it is for the very reason of being so easily defensible, that the city of Enna has always commanded such an important role in the governance of Sicily.

Before the Arabs arrived in Sicily in the 9th century the town was a Byzantine fortress. The story goes that after a long siege, the Arabs only succeeded in forcing their way into the city after they had sent a small boy up through the sewers to open the city gate from the inside.

When the Normans landed in Messina in 1060, Enna was their goal in their march across Sicily.

Not surprisingly therefore, the Castle at Enna is a fascinating testament to the town’s turbulent history, and not only; it has some spectacular views – to Etna in the East, the Madonie mountains in the North and over to the Iblean hills in the South.

After visiting the castle, there is time to stroll through the streets of Enna and perhaps enjoy a visit to the cathedral.

Evening meal and overnight in Enna.

We leave Enna and take a drive through lush Sicilian countryside to the town of Caltagirone. Caltagirone was once the centre of a prolific ceramics industry in Sicily and is still the source of the famous Sicilian pottery. We visit the fascinating ceramic museum before strolling to the fabulous ceramic-tiled staircase of Santa Maria del Monte.

After Caltagirone,  we head to Piazza Armerina. Assuming that guests will already have visited the Roman Villa on a previous occasion, so on this journey we continue on to Morgantina – a Hellenic town set in the valley beneath Aidone with fabulous view towards Mount Etna.

After visiting Morgantina, we return to Enna.

Evening meal and overnight in Enna.

This morning we go in search of one of the more intriguing sites of Sicily’s interior.

Throughout the period of Late Antiquity, troglodyte communities were common throughout the Mediterranean. The most famous and most extensive of course, are the underground cities of Cappadocia in Turkey. But there are numerous other examples; Matera in Southern Italy and Vardzia in Georgia being just two. In Sicily, one usually thinks of the dwellings carved out of the rock in places such as the Cava d’Ispica. But there is also a realtively unknown and equally fascinating “Byzantine Village” in the centre of Sicily at Calascibetta, not far from Enna. It is known as “Hisn al Giran” – meaning “the fortress of the caves” – a name taken from a chronicle written by an Arab scholar in the 9th century AD descriping the sacking of a small community of around forty dwellings. We do not know for sure, but quite possibly the chronicler was referring to this fascinating site.

There are numerous points of interest here. As well as the cave dwelling themselves, there is a pigeon loft – pigeons were kept for their meat, eggs and also as their droppings were used as fertiliser – and there is also a small winery – a testament to viticulture once having been extensive in this region (nowadays, there is no wine production in Enna) and there is also a small “Qanat” – a water course, quite possibly created during the Arab domination of the island.

Lunch is in a small bakery near Calascibetta. And after lunch, we drive through the Sicilian countryside to Sperlinga.

The very name, “Sperlinga” derives from the same root as the Greek word σπήλαιο meaning “cave” – think of our English word “speleology”: the study of caves.

Perched on a bluff of rock overlooking the town, its handsome castle, dates from Norman times and is notable for having rooms, staircases and stables carved out of the underlying rock. Today, inside the entrance to the castle, there is a small exhibition of how these cave-dwellers might once have lived – including a loom and some kitchen utensils. An interesting detail is that the second of the rooms has an obvious “door” high up in the wall, suggesting perhaps that once the floor lever was higher than at present and at some time in the past, the room was made higher by excavating the floor.

In the twelfth century Sperlinga became home to an influx of Lombards arriving in Sicily from Northern Italy. Even today, their mark still remains on the local dialect – known technically as a “gallo-italic” dialect.

Evening meal and overnight in a small, comfortable hotel in Gangi.

We start the day with a visit to Petralia Soprana, the only village in Sicily to have the “Bandiera Arancione” of the Touring Club Italiano – the award for an exceptional village. It contains some beautiful churches and boasts some breathtaking views of the interior of Sicily. After a picnic lunch we drive a short distance to Gangi.

In 2014, Gangi was voted one of the “the most beautiful towns” in Italy. Built over the peak of a hill, it looks from the distance something akin to a carapace and, in the early Spring, usually with the backdrop of the snow-covered peak of Etna. It is surely one of the most unforgettable sights in Sicily.

Evening meal and overnight in a small, comfortable hotel in Gangi.

We begin the day with a couple of hour’s drive to Mussomeli through fields of ripening wheat and spring flowers. In Mussomeli we visit the Castello Manfredonico and one of the most iconic castles in Sicily. The castle seems almost to grow from the rock on which it is perched.

We continue to Monte Cammarata where we have a picnic amid a spectacular setting before visiting the monastery where Saint Rosalia, the passionately venerated patron saint of Palermo, is said to have lived and continuing on to our evening accommodation – a stunning location set high in the Sicani Mountains.

Evening meal and overnight in a country hotel above Santo Stefano Quisquina.

In the morning we move on to Palazzo Adriano, where much of the film Nuovo Cinema Paradiso was filmed. Albanian in origin, with its wide cobbled streets and expansive central piazza, this small town still exhibits an untouched air and it is easy to see why Giuseppe Tornatore chose it as the set for his masterpiece. There will be a chance too to visit the small Cinema Paradiso museum.

Another short drive through some stunning scenery brings us to the Bourbon royal hunting lodge of Ficuzza. After lunch at the hunting lodge we continue on to Piana degli Albanesi, home to another thriving Albanian community which still maintains its strong traditions. After visiting the museum, we continue on to Scopello, a tiny village that once housed a thriving tuna fishery, wonderfully captured in Gavin Maxwell’s 1953 book Ten Pains of Death.

Evening meal and overnight in Scopello.

Scopello and the Parco dello Zingaro

On our final day in Scopello, there is a chance to either relax by the pool, or else take a walk in the nature reserve of the Zingaro Park.

Evening meal and overnight in Scopello.

Drive to Palermo in time for flights.

What some of our guests have said about our Hidden Sicily Tour: