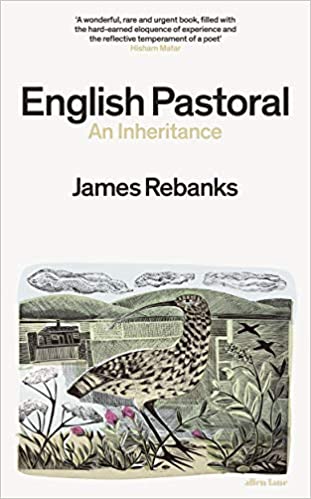 My inflight reading on the return journey to England last week was English Pastoral: an Inheritance by Lake District farmer James Rebanks. Few books I have read over the last thirty years have made such an urgent impression as this one and I read the whole book in a single day.

Rebanks had been Michael Berkeley’s guest on Private Passions the previous week and although I had not hitherto come across his books, just from the way he talked I realised he had an important argument.

English Pastoral begins with a memory – from perhaps the end of the 1970s – of the young James Rebanks sitting on a tractor with his grandfather and learning to plough with the seagulls rising and falling “in hungry tumbling waves” behind them:

I sat in the back of that tractor, with the old man in front of me, and for the first time in my life thought about who we were and what the field was, and the relationship between the gulls and the plough. I was a boy living through the last days of an ancient farming world.

The scene is one that we are all familiar with and could come from any volume of the vast acres of English country writing, but it is one that Rebanks is superbly qualified to recount.

The real significance of this benign memory doesn’t confront us until much later in the book, when twenty or so years later, Rebanks and his father are driving past a neighbouring farm and observe some mastodonic farm machinery ploughing a field the size of Cumberland. In the plough’s wake there is not a single herring gull: a sign there are no worms in the soil for them to eat. And the catastrophe of a field without earthworms and grubs is the thesis that Rebanks presents us.

The book turns around a trio of characters – the author, his father and his grandfather. The way in which each represents a stage in the evolution of farming is almost allegorical: his grandfather, the traditions and inherited ways of the old-school of farming, his father (albeit with huge misgivings) the modern farming techniques. And the author? He places himself squarely in the middle of the crossroads, the hapless inheritor of both a millenium of traditional farming practices and the mess created by some of the farming methods of the last thirty years.

To express it thus is to grossly over-simplify, as if it were a simple struggle between good and evil – between the ‘good’ traditional farming methods and the ‘evil’ modern ones. That Rebanks doesn’t reduce it to this is the great power of English Pastoral. His narrative is far more subtle and empathetic than this simple synopsis can portray. It is as if his whole life has been in acceptance of the inevitability that he was born to farm – but also to be a custodian of our heritage:

My inheritance is an ancient one, the chance to live and work on a piece of much-loved land.

He doesn’t shoulder this responsibility lightly. There is a sympathy for and a willingness to listen to the arguments of conservationists, to the theories of rewilding, and to Lucy from the “Water Board” (who incidentally turns out to be one of the heroes of the book) who persuades him to revert a stream to nature.

But it is weighed against an understanding of the economics of farming and the pragmatism of an old countryman which qualifies Rebanks to put forward an argument that few others are authorised to do.

I myself grew up in the countryside. During the school holidays we worked picking potatoes and peas, or weeding the wheat of wild barley. As a teenager, I worked for a local a thatcher, learnt to lay hedges and build stone walls. I still remember watching the old fashioned reapers and the threshing machines working late into the night. I can also remember the farmer at the end of the village putting out the milk churns for the milk lorry to collect them. I remember fields of lapwings in my childhood, and then realising that by my teenage years they had all disappeared. The countryside was in my blood.

So I can just about remember the countryside of Rebanks grandfather. And I have vivid memories of how it was transformed during the agricultural revolution of the 1970s.

But the book is not just a documentary of the last half century of farming. There is a social commentary too. The women in the book – inevitably, the respective wives of the menfolk – tell a fascinating social story.

The author’s grandmother had vey much been the traditional “farmer’s wife”: baking, cooking and attending to domestic duties as one might expect of a farmer’s wife of the post-war years. In those days, if the farmer’s wife was working in the cow sheds it was because the farmer wasn’t pulling his weight.

On the other hand, the author’s mother was very much forced to work in the cow-sheds, if only to keep the farm’s finances balanced.

And nowadays? As Rebanks candidly admits, it is his wife who runs the farm whilst he writes the books. And his sons and daughters who are now at school? What role will they take on in the future?

What makes the book compelling is that it is not simply a thrashing of all that has happened in the last fifty years and the life of one farmer. Rebanks’ accounts of the poverty his family endured while he was a child, are a moving testament to the reasons things were done as they were – the introduction of herbicides and pesticides, the removal of hedges from between fields, getting rid of some of the cattle. It is all told with great candour and frankness without seeking to place blame on anyone.

Equally moving is the sincerity with which Rebanks is able to admit the difficulties and the challenges facing modern farmers. He lays down the gauntlet to explain to a lay audience the hardship of being the keeper of a small hill farm. But he realises that the business school approach to farming, the one that farmers were taught at agricultural college in the last two decades of the twentieth century was wrong:

We convinced ourselves that farming was just another business, subject to the same rules as any other – but that is coming to seem like the most foolish idea ever.

The book throws up as many questions as it does answers, and it is clear that Rebanks himself is still searching for the solutions:

The essential thing we know about the future – whether we are looking at economics, climate or biology – is that it is unpredictable, so we need to maintain our library of agricultural diversity, both for the things we know now that we need, but also many things that we do not yet know we may require in the future. The strength of diversity is that it gives us resilience and robustness for the future. It gives us options. It spreads our risks.

But perhaps the great message that comes out of this book is that we should stop blaming farmers for the destruction of the countryside and point the finger at ourselves, the consumers.

The share of British household income spent on food and drink has declined from about 35 per cent of the average household budget in the 1950s to about 10 per cent today.

If we want farmers to maintain the landscape as a scene from Constable, we cannot also expect them to produce food for us costing a ha’penny. We have to be prepared to pay for it.

The book doesn’t necessarily give us easy answers. But it is full of thought-provoking aphorisms. Almost every page gives us cause for reflection, but for me the most moving sentence in the book is perhaps the following:

There is an old saying that we should farm as if we are going to live for a thousand years.

It is a sobering thought. This is very much the book that has been missing from the canon of countryside literature. And a book that perhaps only one like Rebanks is able to write. Not many countryside writers have the qualifications, the weight of history, the insight, and also the literary skills to pen such a masterpiece as this. It is a fine achievement and if you read just one book this year, I recommend you make it this one.

English Pastoral: An Inheritance by James Rebanks is published by Allen Lane.

If you enjoy the countryside, why not join us on one of Esplora Travel’s day walks?